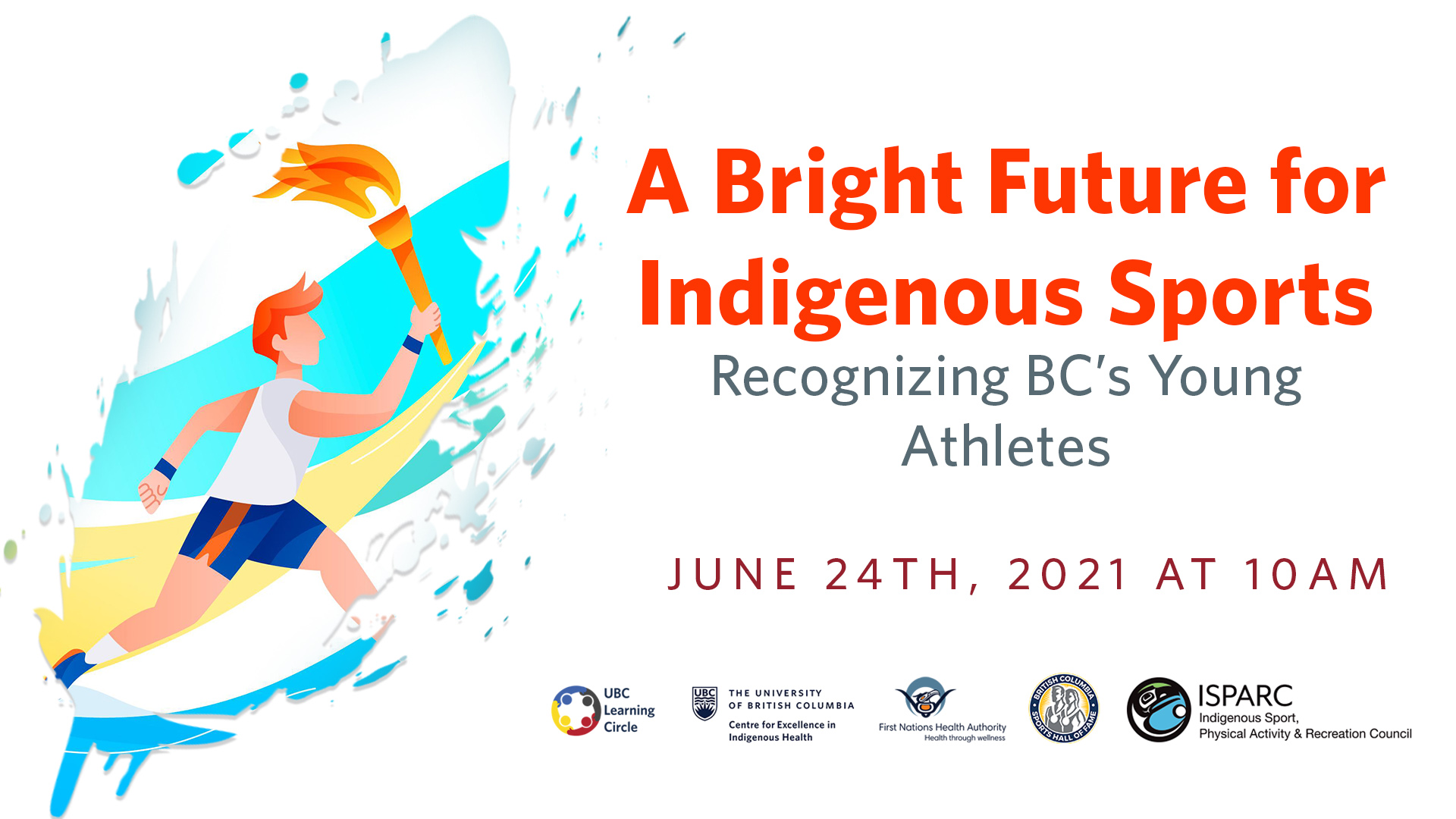 The First Nations Health Authority (FNHA), Indigenous Sport, Physical Activity & Recreation Council (ISPARC), the BC Sports Hall of Fame and the UBC Learning Circle are hosting a panel of Indigenous athletes to share their journeys and stories of inspiration.

This panel features young athletes, all of whom were awarded the Premier’s Award for Indigenous Youth Excellence in Sport, which celebrates the outstanding achievements of Indigenous youth athletes throughout the province for their leadership qualities both on, and off, the field.

Join moderator Janene Erickson as she talks to the panel of young athletes including Taya Suttill, Hunter Lang, Jonathan Fraser-Monroe and Garnet Currie.

Thank you for your interest and participation!

This session’s video is now available for viewing.

Thank you to everyone for your continued interest in our events.

We would like to reiterate that everyone is welcome to our UBCLC sessions.

Our events aim to embody a safe space for everyone of all different backgrounds to have their opinions and voices equally heard. 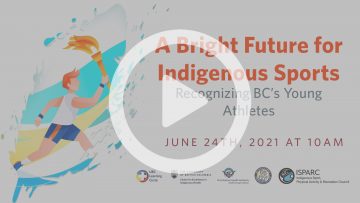 Listen to this session on the go! 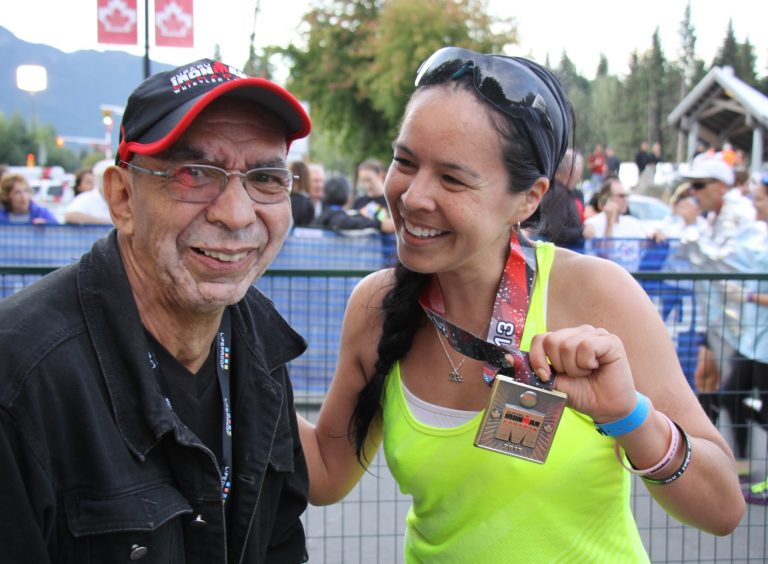 Janene Erickson is Dakelh from Nak’azdli Whut’en, a First Nations community in northern BC and an adopted member of the Takaya Wolf Clan, First Nations Health Authority (FNHA) family.

Empowered and inspired by her parents, who navigated the able-bodied world while physically paralyzed and fighting a neurological disease, Janene has an intense appreciation for what our bodies are able to do. Growing up, despite her enthusiasm, Janene wasn’t able to access sports – but she always had a pair of runners. The affordability of running offered an avenue of wellness that became the base of her lifelong health and wellness lifestyle, running races including the Boston Marathon and eventually expanding into Ironman competitions. Through the difficult year last year, she was still able to achieve her 2020 goal of running 1,000 miles in a year.

Janene earned her degree in kinesiology from the University of the Fraser Valley and as a student, she also became a certified fitness instructor and personal trainer. Janene went on to pursue her Masters in Public Health from UBC and as a “customer-owner,” she proudly serves First Nations people through her current role in the Office of the Chief Medical Officer at the FNHA. She has been appointed as a public member to the board of the BC College of Nurses and Midwives and sits on the Inquiry Committee of the College of Physicians and Surgeons of BC. She brings her lived experiences, the teachings she’s learned and the education she’s earned to her work and strives to live life with an open heart and open mind. 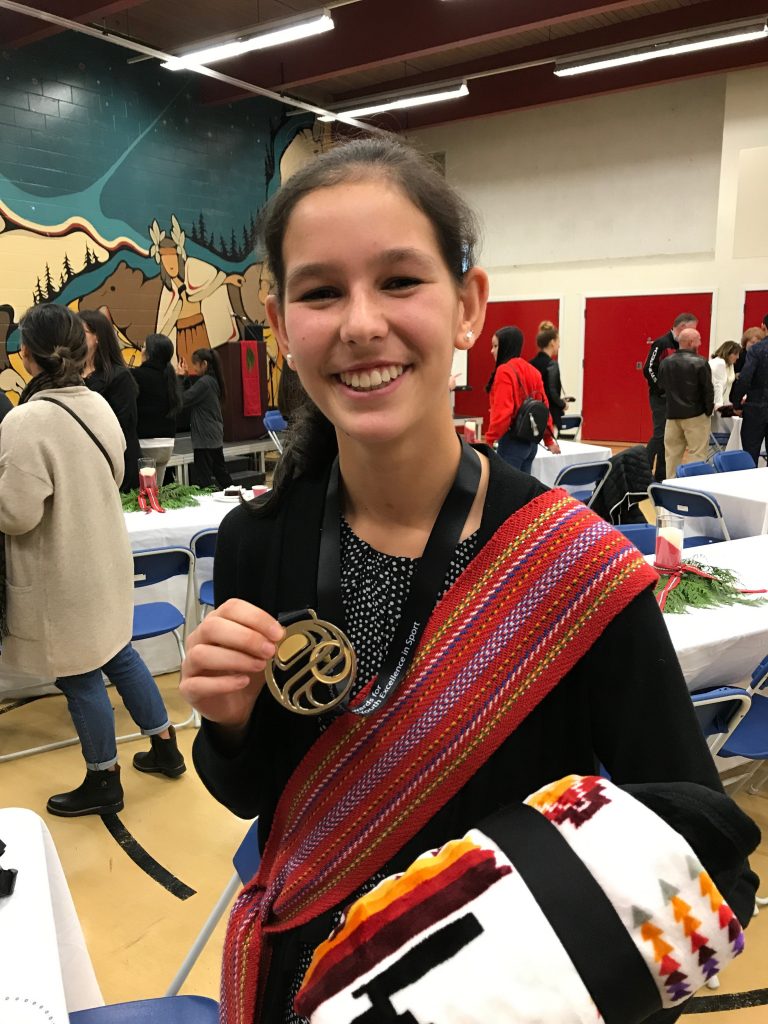 Taya is a proud Métis athlete with roots from the Red River Settlement of Manitoba.

In 2016, Taya competed at the BC Indigenous Provincial Soccer Championships on the U15 Girls Fraser Region team. Upon placing first, her team was chosen to represent BC for the U16 Female Soccer team at the 2017 North American Indigenous Games (NAIG). At NAIG, she scored the opening goal of the final game and her team won the gold.

A couple of years later, Taya was selected to become captain of the U18 Girls Fraser Region team, which competed and placed in first place at the 2019 BC Indigenous Provincial Soccer Championships.

The team was to compete at NAIG 2020 as Team BC for U19 Female Soccer, but unfortunately the games were cancelled due to COVID-19.

In recognition of her hard work and accomplishments, Taya received a regional Premier’s Award for Indigenous Youth Excellence in Sport in 2018 and 2020. Furthermore, she was valedictorian of her secondary school’s graduating class of 2020. 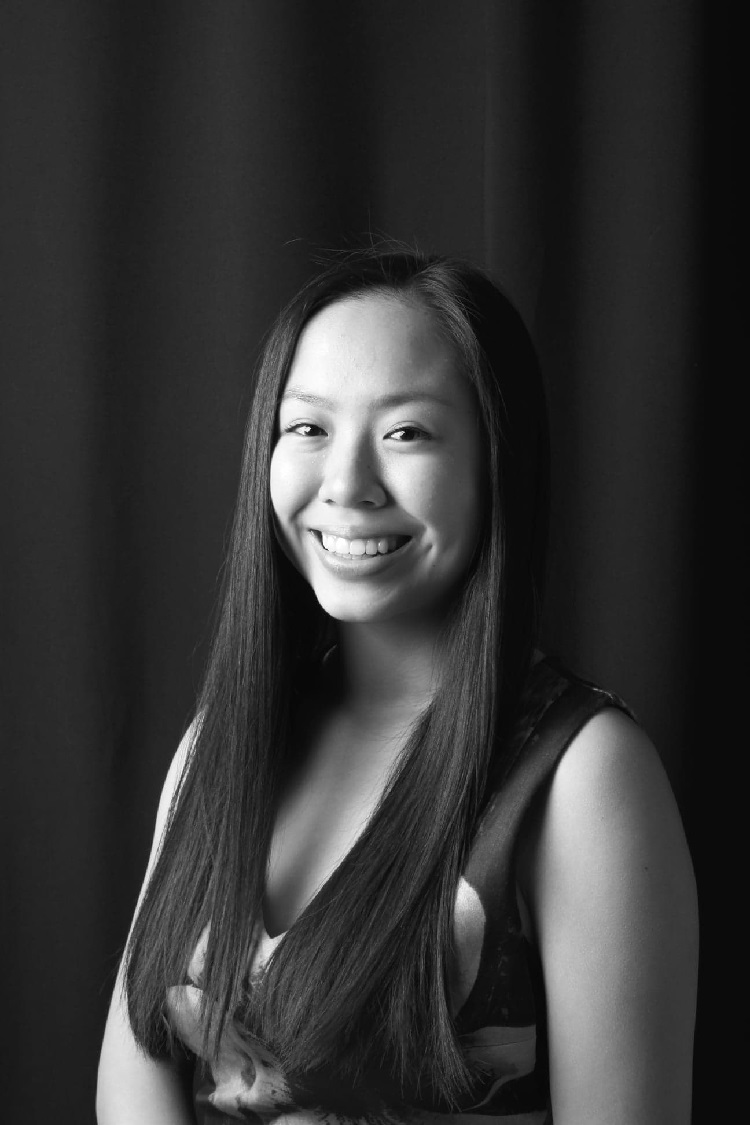 Hunter Lang is a 20-year-old from Port Moody, BC. She is First Nations and fifth generation Chinese, and her family comes from Ts̓kw̓ áylaxw First Nation (Pavilion Band) near Lillooet, BC. Hunter earned a bronze medal in the Toronto 2017 North American Indigenous Games as part of Team BC’s U16 Female Softball team and she was also selected to represent her province as a Team 88 Ambassador. Hunter was also the recipient of the 2017 provincial Premier’s Award for Aboriginal Youth Excellence in Sport and was later included in the BC Sports Hall of Fame from 2019 to 2020. She has played competitive soccer for 14 years and has enjoyed martial arts, particularly taekwondo, and earned her black belt at the age of 10. Hunter graduated from high school in 2019 where she received her International

Baccalaureate Diploma and her Dogwood Diploma. She now is an undergraduate student at the University of British Columbia where she continues to enjoy playing recreational soccer in her spare time, while pursuing higher education in political science and law. 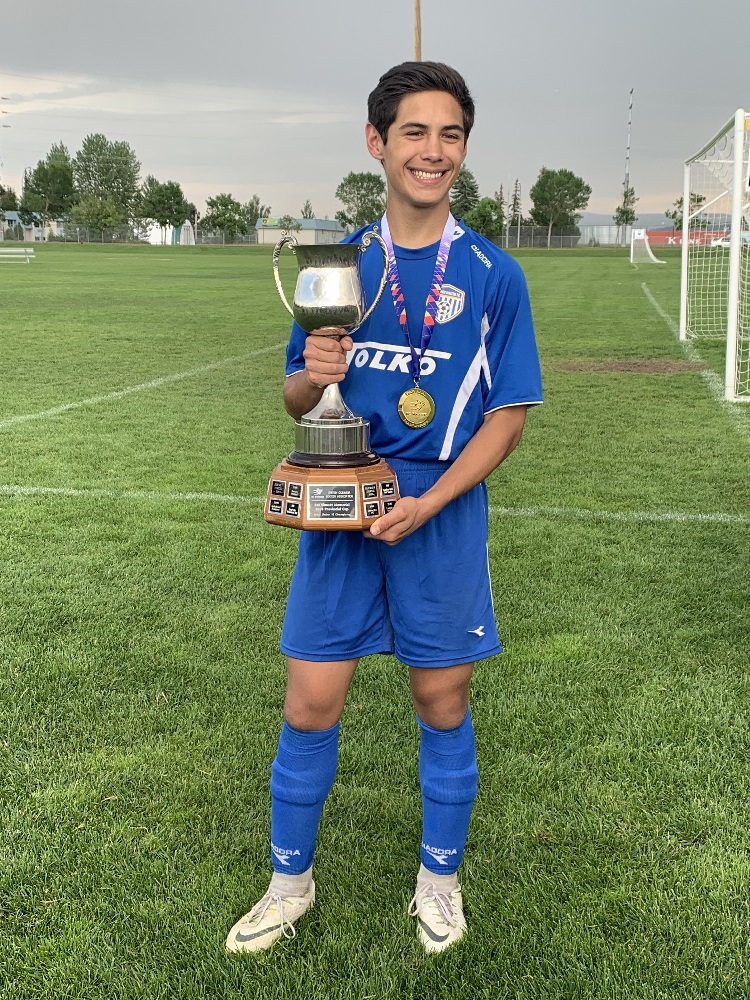 Jonathan Fraser-Monroe is a proud member of Tla’Amin First Nation. He was born and raised in Vernon on the traditional lands of the Syilx Okanagan Nation. He plays basketball, soccer and volleyball on club and rep teams. His soccer team went undefeated at the 2019 Provincial Tournament and also earned the trophy for fair play. He made Team BC for basketball in 2020 and was as disappointed as everyone else when NIAG 2020 in Halifax was postponed. He was also selected to the Okanagan Valley Elite Basketball team in 2020 and attributes his success to the exceptional coaching he has received from Peter Waardenburg with Syilx Basketball. In his first year with the club, Jonathan was selected as MVP for Sky Volleyball. He has taken his love of sport beyond playing to refereeing for soccer and to coaching basketball at a local elementary school; more recently, he coached the boys from grade eight and grade 11 at his high school. Jonathan was recognized as Junior Athlete on the Year at WL Seaton Secondary School in both of his junior years.

Living in Syilx Territory, he has also participated in the Unity Run for the past three years, an important event for youth in community. Over the past three years Jonathan has raised funds for kids battling childhood cancer through the Great Cycle Challenge Canada and is preparing for the fundraiser again in August, 2021.

In 2020, he was the proud recipient of the Premier’s Award for Indigenous Youth Excellence in Sport. 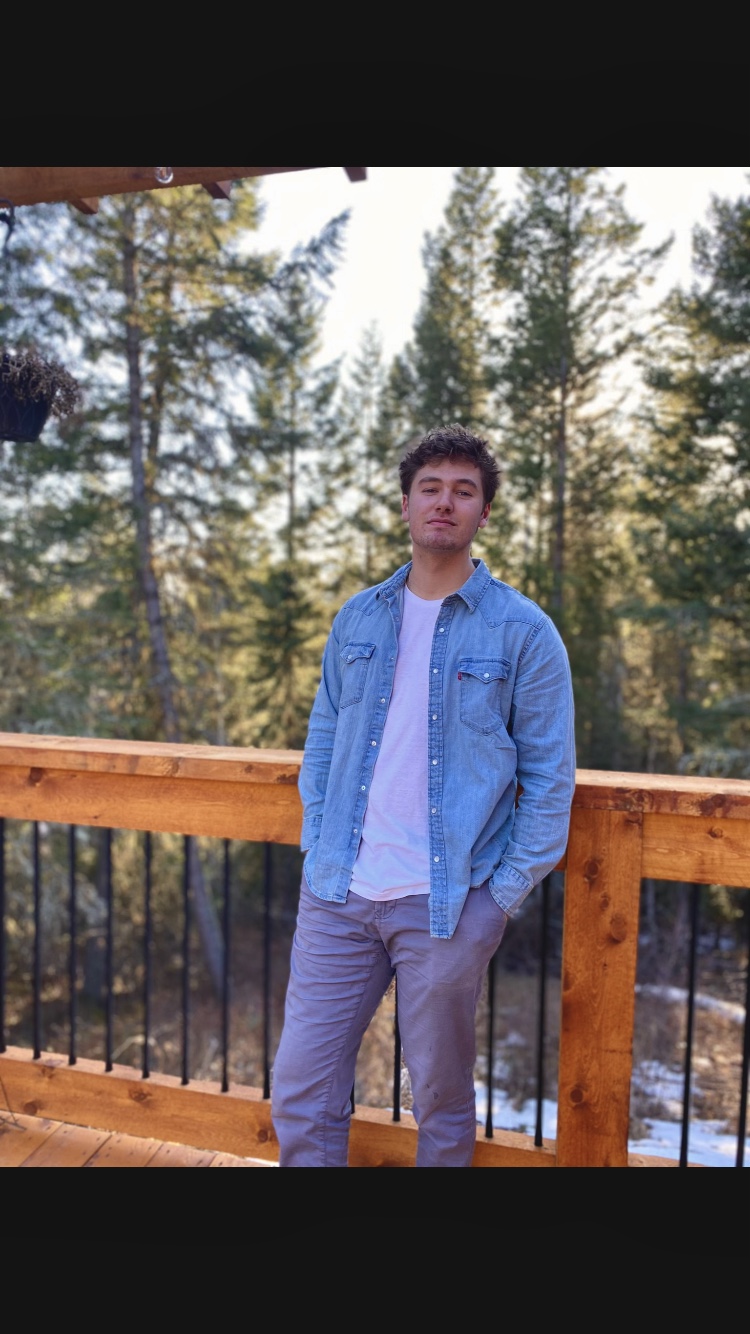 Garnet Currie is a student at the University of British Columbia, majoring in biology, interested in a career as an optometrist. However, she/he’s also a competitive swimmer who’s recorded a 100m butterfly swim in 59 seconds and a 200m freestyle swim in two minutes.

He won the Premier’s Award for Indigenous Youth Excellence in Sport and have actively been involved in competitive swimming competitions and provincial championships. He also received five silver medals and two bronze medals at the North American Indigenous Games (NAIG) and had the opportunity to participate in the Mel Zajacs International Meet and the BC Summer Games.

In high school, he was a part of the Quesnel Waveriders Swim Club and currently are a part of the Vancouver Pacific Swim Club at UBC. His proudest moment from their swimming career would include being a part of Team BC and competing against other Indigenous swimmers during the North American Indigenous Games.

My proudest moment during my swimming career would be being a part of Team BC and competing among many other indigenous swimmers during the North American Indigenous Games. I felt very grateful to be a part of such an amazing experience and putting as much effort as possible into my races to contribute to my team. On a more personal level, a few other proud moments would be having a time of 59 seconds in the 100 meter butterfly and a 2 minute 200 freestyle. I feel as though the times in these races were a big step in my swimming career and show that I have tremendous athletic ability.

The competitive nature of the support, competing amongst friends and pushing each other to do our best is what really motivated me.